It was 4°C (about 39°F) with a bothersome drizzle and according to the Weather Channel, humidity was at about 80%… I’m guessing the remaining 20% was hiding inside my body because my bones started to ache as soon as I got out of the car and made my way to the starting line. To say it was so cold you could see your breath would be an understatement.

November 24th, 8:00 AM at Parque Fundidora. Exactly one year after my first 21K, I set out to repeat this distance and achieve another personal milestone as an amateur runner.

My training building up to this day had not gone exactly as planned, due to a series of business trips and events but more importantly, two ankle injuries which had made me interrupt my distance schedule. However, I had reached a comfortable 17K during the last week of training so I was confident about being able to finish in one piece. Then on Thursday evening, Monterrey went from autumn to winter in a heartbeat. I could picture every runner going online and constantly checking the weather forecast for Sunday morning, hoping for a little bit of sun… I sure as hell did. By Friday evening it was certain, the cold and rain had set it and the best we could hope for was a 4°C low and a 7° high, which was exactly what we got on Sunday.

I had never run in such cold weather so even though I was supposed to rest on Saturday, I decided to do a 7K practice run in order to check how my body would react. It was also a good exercise in order to figure out what running gear I would wear for the race. I wore a light jacket with a long sleeve dry-fit shirt and running pants but after about half a kilometer I could feel it weighing me down and suffocating me a bit so I decided I would run the 21K wearing compression pants, an Under Armour long sleeve and the race’s short-sleeve t-shirt.

We ran it forward 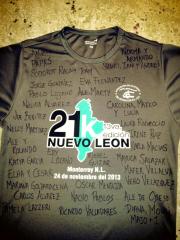 After my last practice run, I went home and began writing the names of people who enrolled on my “Run it Forward” event on my t-shirt. “Run it Forward” is something I came up with last year in order to give me extra motivation during training and the race itself. Basically, I dedicated Kms. to friends and family in exchange for them committing to some form of positive action towards their own lives or the communities around them. This year 31 people supported my run with these commitments so I ended up grouping some people in the same Km (like my good friend Righel said, maybe my next Run it Forward will have to be a marathon).

I would like to take this moment to recognize and thank each and every person who supported my second 21K. You guys made ALL the difference and gave me 31 reasons to go through with what I thought was crazy as soon as I felt the cold breeze during the first hours of Sunday morning. If I was running just for myself and my pride, I could have easily dropped out of the race or lowered my pace. It’s easy to succumb when the only person you have to answer to is yourself. Thanks to you guys running it forward, in every step I took I took ownership of your personal commitments and that drove me all the way to the finish line. Thank you, Nélida, Joe, Norma + Armando, Carlos, Shanti, Nacho, Laura, Nelly, Anjali, Mayuca, Irene, Sodorot Racing Team, Karla, Pablo, Jorge, Eva, Righel, Ale, Kishore, Alejandra, Edy, Ale + Rolando, Katya, Elha + César, Mariana, Ricardo, Oscar, Mafer, Pamela, Vero and last but definitely not least, Carolina + Mateo + Lucía. From the Sodorot Racing Team, a special thanks to Ángel who accompanied me during the last 6K of the run and took some awesome pictures.

I had created a running playlist on my iPod but I guess the cold froze my brain early in the morning because I left my iPod at home, so I ran without music.  This was definitely a new experience for me, as I ALWAYS run with music and it actually helps me set a beat and get my mind off the running itself. I set my Nike Sportswatch to show me distance and average pace and decided I would not check time elapsed until I finished the race.

The first 11K I ran next to Cirilo, a colleague from work who is usually faster than I am and is training for his first marathon.  The route was not without its share of surprises, including a series of overpasses which challenged my legs not to cramp up. After the 11th, Cirilo sprinted ahead but I kept my pace, surprised at the fact that after a few kilometers of my legs aching due to the cold, my body temperature had risen to a point where the cold was bearable. After the 15th , my friend Angel joined me for the last leg of the race (and took some cool pics in the process).

As I approached the finish line, sweat had dripped down my face and my contact lenses were watery so the goal line clock was blurry. Still, I thought I read the numbers right and surprisingly I was 3 minutes and a half under my time from last year. Later, I corroborated this by checking my official chip times. Under far from comfortable weather conditions, somehow I had been able to best myself. That’s an awesome feeling!

Let it be said that I am not at all a fast runner, but that’s ok. I don’t attempt to win any Olympic medals but it’s still great to see that I was able to push mind over body and achieve the objective I had set myself out to.

The biggest objective I have when I run, is to attempt to stay fit so I can live longer and spend more time with my family. I was not born the healthiest baby but with perseverance, I’ve pulled through and developed my body to a point where I can withstand somewhat heavy physical activity. This would not be possible if I did not have my wife and two kids as my most important motivators.

Thank you Carolina, Mateo and Lucía. Thank you for all your support and love. You are my world. 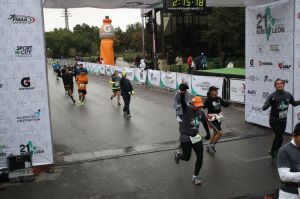 I was born with asthma and a number of respiratory problems. I was also allergic to around 40 different substances (both food and environmental).

When I was a kid, I looked like one of those “For twelve dollars a month you can sponsor this child” TV commercials. I was skinny and had below average muscle tone.

Because of my asthma I could not be as active a kid as I would have wanted to be. Trying too hard meant a possible attack which if you’ve had one, you know it feels like you’re dying because you simply can’t breathe.

The asthma attacks eventually went away but something that had a larger effect lingered: I think I was about 8 years old when a doctor told me and my mom that “this kid will never stand out physically.” For a while and mostly because of the fear of my asthma creeping up on me, I believed this. That was my mistake.

I may not have the DNA to be the next Michael Jordan and it has surely taken me longer than most would consider admirable, but yesterday I once again proved to myself that hard work, determination, perseverance and believing in what is possible, makes all the difference. I did this for myself, for my wife and children and for many people who supported my goal and motivated me to achieve it.

No, I did not climb up Mount Everest or break any world record but yesterday I broke my OWN personal record and for now, that’s good enough.

Yesterday I ran my first half-marathon. And that doctor who never believed I could do it, can kiss my ass.